The 2014 Detroit Auto Show will wrap up this weekend after two weeks of exciting new car model debuts and other attention-grabbing headlines.

We make custom designed, custom fit car floor mats at GGBailey.com, so we always keep an eye on the biggest auto shows to see what new models and automotive trends emerge. The 2014 Detroit Auto Show did not disappoint.

We posted a blog last week about our favorite new cars debuted during the show. You can read that post here. For this post we decided to focus on the trends that drove the Detroit Auto Show this year. Like most other industries, the world's automotive makers tend to copy what works while also breaking new ground.

We have included below five trends worth nothing that emerged from the Detroit Auto Show. Read our thoughts and then share your own in the comment section at the bottom. And remember, GGBailey.com is offering FREE ground shipping* just in time for Valentine's Day. No coupons or promo codes required. All you have to do is select the free shipping option when you check out.

If you want to personalize your car floor mats in our Design Your Car Mats™ section, or if you prefer the patterns of our Car Couture™ line, you won't have to pay for shipping. Our custom designed car floor mats make great Valentine's Day Gifts, so check out the options for your sweetheart now.

1. Luxury can be affordable

Just a few years ago, luxury vehicles were reserved for only the wealthy few, but today the world's top automakers are trying to reach into new markets by offering more vehicles priced to appeal to wider audiences.

Take the Audi Q3, for example. Planned for the fall and likely to be priced in the $32,000 range, the compact crossover is intended to draw a new, younger customer base by offering lots of standard features that would normally cost extra. Heated, powered, leather seats! Panoramic moonroof! Xenon headlamps with LED accents! Keyless start! All of these will be standard. BMW also introduced its new 2-Series, a smaller family of vehicles priced to appeal to the mass market. We included the BMW M235i in our Favorite Five last week.

Both Audi and BMW, as well as a few other of the luxury brands, are trying to cash in on the success Mercedes-Benz has seen with the popular CLA sedan, priced at just under $30,000. You might remember we first wrote about the CLA-class when Mercedes-Benz introduced it during the Frankfurt Auto Show last year. 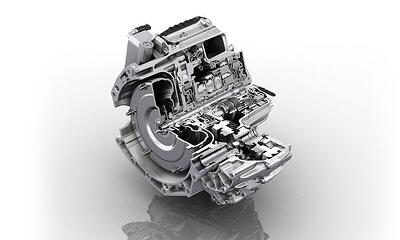 Government fuel-economy mandates are bearing down on automakers, resulting in small tweaks in some cases and bold innovation in others to get more mileage out of every vehicle.

Ford's gutsy move to switch to all-aluminum bodies for its best-selling vehicle, the F-150, reflects a costly gamble. The switch from steel has dropped about 700 pounds from the vehicle, meaning the truck's fuel-economy numbers improve by default. On the flip side, the truck will cost more to make and more to repair if damaged. Reviews seem mostly positive, but buyers will have the final voice.

Meanwhile, Acura and Chrysler are starting to install the industry-leading nine-speed automatic transmissions for their latest offerings. There will be one in the new Acura TLX and in the Chrysler 200 sedans. As with the aluminum body, the nine-speed transmission adds fuel efficiency, but not without a cost. More gears are better able to keep engines operating at their most efficient, but also add cost and complexity to the transmission.

Automakers also continue to experiment with new materials and thinner designs to get more interior room in smaller, lighter vehicles that use less fuel. The idea is to attract buyers to vehicles that already meet the higher fuel-economy standards. 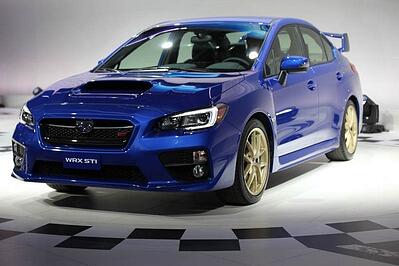 As we wrote in our post previewing automotive trends for 2014, more automakers are introducing and improving more hybrids and electric cars, and we expect that trend to continue. However, it's not time to write off the gas powered motor yet.

The engines are getting better though, as turbo charging and direct injection, perks usually associated with high powered performance vehicles, are helping with fuel efficiency while also adding power. Add in increasingly sophisticated computer engine management and automakers are getting more power out of smaller engines.

The new Subaru WRX STI is powered by a 2.5.-liter four cylinder boxer-style engine that produces 305 horsepower. The company hasn't released any performance figures yet, but with 290 pound feet of torque at 4,000 rpm, Subaru of America's national manager Dominic Infante told CarScoops.com that the WRX STI should reach 164 miles per hour.

Even Cadillac put a turbocharged 2.0-liter four cylinder in the new ATS Coup, which claims an additional 10 percent torque and a total of 295 horsepower. We included the Cadillac ATS Coup in our Detroit Auto Show Favorite Five. 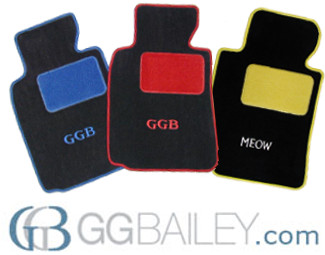 Typically, when a new car is rolled out for the first time at one of the big auto shows it is shown in one of the basic colors: white, black, gray, or sometimes red. Just check out the Audi and the Ford above. But at the 2014 Detroit Auto Show, there was a wash of blue, like the Subaru above.

The new Porsche Targa, the Lexus RC F, the Volkswagen Passat, the BMW M3, the Chrysler 200, and several of Audi's other offerings were all sporting bright blues. It's not a rare thing for a new color to emmerge from an auto show like this, but blue is a color often reserved for electric vehicles or hybrids, which makes the move is interesting.

We like the color and we can make custom fit car floor mats to compliment blue or any color in our Design Your Car Mats™ section. Our blue options include blue edging, a blue heelpad, or blue embroidery. You can add your name, initials or a monogram in blue to compliment your blue car. 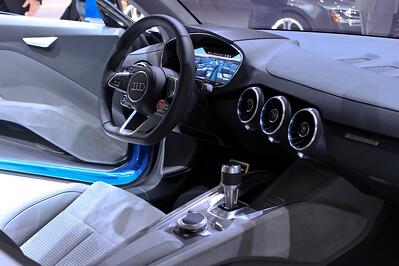 Consumer reviews have been mixed, but automakers continue to include technology that essentially results in semi-autonomous driving, and the trend seems to include a push toward autonomous driving. We included driver assistance as one of our trends to watch in 2014. The Detroit Auto Show only confirmed this with more vehicles than ever including options such as adaptive cruise control, lane assist, parking assist, and more.

Vehicles that connect to the internet and even serve as wireless hotspots are becoming more common, and digital displays that allow for custom driving settings are practically the norm. Automakers are working to better integrate speech technology, and predictive navigation might soon be an option too. The Audi Allroad, a hybrid concept with shooting brakes, is loaded with technological advances, and the vehicle received rave reviews. And yes, it was blue!

All these things were usually reserved for the luxury market, but automakers have caught on that consumers want their vehicle and their devices to sync. The options and upgrades are becoming plentiful, and you should expect to see more of that to come.