The North American International Auto Show, also called the Detroit Auto Show, started just a few days ago, but a lot of exciting new cars have already been been debuted by the world's top automakers. 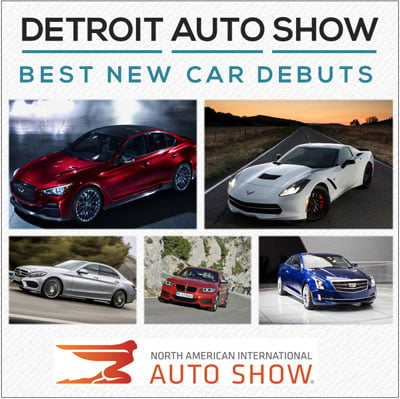 At GGBailey.com, we make custom designed car floor mats for all makes and models, so we are always excited about the Detroit Auto Show because automotive makers use this event to show off their newest vehicles, concepts, and more, and we will soon be making custom floor mats for all the new models.

We previewed the 2014 Detroit Auto Show in this post, and some of the things we included in our preview have already been making headlines this week. So for this post we decided to focus on a few of the new models that have been introduced this week. Below is our favorite five new models so far.

Check out our list, comment with your thoughts at the bottom, and be sure to check out our Design Your Car Mats™ section to design your own car floor mats. Or if you prefer a pattern, check out our selection available in our Car Couture™ section. 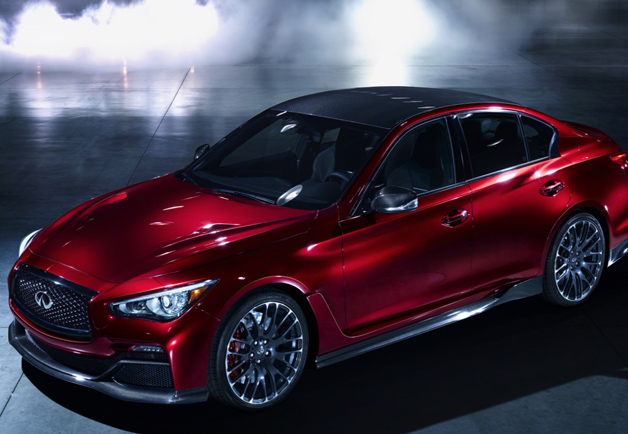 The first thing that really stands out about the Infiniti Q50 Eau Rouge, a concept based on the Q50 sedan, is the color, a beautiful deep red paint job that is said to have been created using a silver base layer and more than 20 individual red-tinted clear coat layers. That sort of specially work is highly unlikely to ever make it to production, but it does result in one amazing car that looks as much art as vehicle.

The Eau Rouge was built using a lot of carbon fiber and 21-inch alloy rims, and officials are developing a motor than will produce more than 500 horsepower. Infiniti hopes the aggressively sporty vehicle, once is makes it to production, generates some excitement about the brand that has been missing recently. We think the Eau Rouge could do the trick. 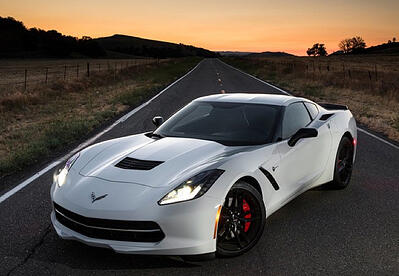 We included the new Chevrolet Corvette Stingray Z06 in our Detroit Auto Show preview, and at the time the only images that Chevrolet had released were teasers. Now the modern American muscle car, with a supercharged 6.2-liter LT4 engine that cranks out more than 625 horsepower and 635 pound feet of torque, has been photographed from every angle. And it is awesome.

Chevy hasn't released all the performance details just yet, but they did say it will come with an 8-speed manual transmission. The exterior changes on the Z06, versus the Corvette Stingray, are entirely functional, and nearly every panel and piece of trim is different. Design director Tom Peters said in a press release that the flared fenders are needed to accommodate larger wheels, the larger vents for cooling, and all the tweaks necessary for improved aerodynamics and high-speed stability.

Our parent company, Racemark International, manufactures the floor mats for the Chevrolet Corvette Stingray, so you can trust that GG Bailey car floor mats meet the qualifications of the finest auto makers in the world.

Click here to read more from Road and Track.

Mercede-Benz's most popular model, the C-Class, gets an aggressive facelift with the addition of the sporty grill and swept-back headlights of some of Benz's more expensive models. The new C-Class is also borrowing some of the high-tech features of the S-Class, including active collision avoidance, adaptive cruise control, and yes, even a cabin perfuming system.

A glass roof, a slightly longer body, and a lighter curb weight round out some of the modernized upgrades. Under the hood, the new C-Class will take a run at being the most powerful car in its category with a 329 horsepower turbo V6 that produces 359 pound feet of torque. Slightly less powerful, there will also be a turbo four-cylinder version. An all wheel drive version will be made available in U.S. markets.

The new Mercedes-Benz C-Class should be available in September. Read more from CNet.com.

In a day and age when cars seem to get bigger every year, BMW is bucking the trend with the new BMW M235i. The M235i, the sportiest member of the 2 Series family, is a slick two-door with a turbocharged inline six-cylinder engine, complete with 322 horsepower and 332 pound-feet of torque, enough to push this smaller BMW from zero to 60 in less than five seconds.

BMW also introduced the new M3 and M4 this week, but we like the M235i because it intended to compete in the entry-level performance car market with a starting price of about $42,000. With Mercedes-Benz rolling out their CLA 45 AMG and Audi set to launch the S3, this is a new market that is about to get really competitive.

Click here to read more and see a photo gallery from AutoBlog.com.

At GGBailey.com, we appreciate subtle style, luxury, and elegance. The new Cadillac ATS Coupe has all this and more, along with two powertrain choices: the standard turbocharged inline-four, or the V-6. A six-speed automatic transmission will be standard with either engine, but a six-speed manual will be optional with the 2.0-liter four cylinder.

General Motor's new luxury compact, featuring the brand’s new Cadillac crest and a wider stance, aims to attract more youth into the Cadillac market. It represents just one of 10 new or overhaul models the automaker plans to debut by 2015.

Have you been following the news coming from the 2014 Detroit Auto Show? Comment below to tell us what you are excited about, or click here to start shopping for your custom designed car floor mats for your vehicle.