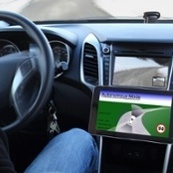 Each year seems to fly by faster than the previous. You jam-pack your calendar full of events and save-the-dates, that the year seamlessly flies by as you chase down the “next big thing”.

How can you possibly keep up with the hustle and bustle of what life throws at you each day? What’s trending and functional in summertime rarely carries over into the winter; in fact, our electronic trends and technology change so much it can be hard to keep up even for the savviest of tech junkies.

The very same can be said about cars--the progress from fossil fuel gas to electric cars and hybrid models is phenomenal. We are seeking ways to help our environment and reduce the amount of damage we as humans are causing. While these are wonderful advancements, the real next big thing in cars is the self-driving vehicle.

Who would have ever thought that we would actually get to the point where cars would be autonomous? Movies and wild theories have been written about this idea, and innovators are acting on it.

For nearly a century  leading car-makers such as Audi, General Motors, Ford, Mercedes-Benz, etc, have been playing with the idea of driverless, autonomous cars. Many of these car manufacturers have designed autonomous features; however, few have actually passed the tests as a fully autonomous automobile.

Google’s self-driving car went through a 14 mile driving test in 2012. This test was routed in Las Vegas, Nevada and administered by Nevada motor vehicle examiners. It passed the test; however, this test left out a few performance areas, such as how it handles roundabouts, no-signal railroad crossings and school zones.

Regardless, this test was a huge step in the collaboration of computers and automobiles.

Most recently in November a Google self driving car, part of Google's self driving project was pulled over by the police for driving too slow!

TESLA is branded on its environmentally friendly models, which don’t require an engine or fuel and solely run on a rechargeable battery. Teslas are semi-autonomous vehicles, as their models have an autopilot function that frees up the driver’s hands from the steering wheel and feet from the pedals.

These are semi-autonomous vehicles because throughout your drive, you will be asked to touch the steering wheel- a light tap will work too- to continue in autopilot mode. If the driver chooses to grab the wheel, the autopilot will disengage and the driver will retain full control of driving.

In October a TESLA Model S completed a cross country trip in record time. Traveling from Redonda Beach, CA to New York City in 57 hours and 48 minutes according to Wired.

This record feat of driving was done by the same team who claims to hold 8 EV records. Roy, one of the three veteran record setting drivers, set an unofficial “Cannonball Run” record in 2006, driving from New York to LA in just 31 hours and 4 minutes.

Over the past century, cars have continued developing and evolving through the use of advanced technologies. Newer car manufacturers have emerged harnessing on innovative methods, such as Tesla models being battery-operated only.

More car manufacturers are adapting their cars to be semi-autonomous. This starts with small changes, such as Apple CarPlay which is available in select cars ranging from ABARTH, Alfa Romeo and Audi to Ferrari, Jaguar, Ford and Mercedes. Apple CarPlay offers users’ voice touch and knob controls to integrate and manage your phone (music, messages, phone and maps) by way of your car.

Full Autonomy- Be the Change

Eventually, with the trends of technology, cars will be fully autonomous; top car manufacturers are predicting their automobiles will have fully autonomous capabilities within the next few years.

We are excited about the future innovations of the car industry and sharing them with you. Automotive changes that free you up at the wheel do not mean you have to sacrifice style and comfort-- for your luxury or commercial vehicle.

Consider spicing up your automobile with changes from the inside out with customizable features, such as a personalized car mat. If you want to learn more, feel free to check out some of our free resources!

At GGBAILEY we pride ourselves by offering custom fit pattern car mats for all TESLA models.