The Family History of the GG Bailey Custom Car Mats

The story of the GGBAILEY custom car mat is also a story about family. Specifically, the Bailey family.

The story starts with Racemark International, which has manufactured floor mats and other accessories for more than 40 years for premiere luxury car brands like Porsche, Mercedes, BMW, Jaguar, and Bentley.

In 1964, Bob Bailey started a company called B&B Motors, but he didn't make floor mats. In fact, Bailey didn't start out as a businessman at all; he was one of the youngest drivers for the Porsche of America Racing Team.

During his time in the racing industry, Bob met Mark Donohue, a famous Grand Prix racer who went on to win the 1972 Indianapolis 500. Bob and Mark partnered to provide drivers and manufacturers with specialty racing equipment like customized roll bars, racing steering wheels, and flame retardant racing suits.

Racemark CEO Bob Bailey poses with his Porsche 911L in 1968. Bob raced as part of the Porsche of America Racing Team. 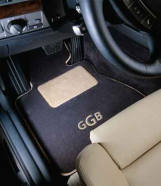 The Mohawk carpet factory located near Bob’s hometown in upstate New York inspired Bob, Ginger, and the Racemark team with an idea. What if car mats were made of carpet?

Tragically, Mark Donohue died in 1975 from injuries sustained during a crash while he practiced for a Formula 1 event in Austria. It was a difficult time for Bob and Ginger, as well as the entire racing community. But that same year, Racemark introduced the very first carpeted luxury auto floor mat, marking a new direction for the company.

Even as young children, Emily and Cannon Bailey helped out around the company. “There were many school vacations and holidays spent at the factory,” Emily said. “I rotated throughout the company in various departments, and it gave me a great feel for how businesses are run.”

Years later, after graduating from college and working for a public relations company, Emily used that business and marketing knowledge to help Ginger launch GGBAILEY.

Likewise, Cannon started out on the manufacturing floor. As an adult, he helped the company transition to the current headquarters in Calhoun, Ga. Now he's a leader in sales and development for both the North American and European branches of Racemark.

Bob said, “It’s everyone’s dream, having started a company, to have a second generation have interest in taking it over." 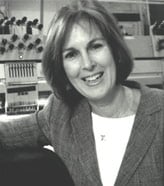 Ginger Cannon Bailey founded GG Bailey in 2001 with a simple idea. Why not create a car mat with the quality of a Racemark mat but the style preferences of the customer?

Years of engineering and innovation meant Racemark had the best product available. By adding an emphasis on style and fashion, Ginger created Design Your Car Mats™, the first line of car mats that could be custom designed and sold directly to the consumer.

Fourteen years later, GGBailey.com and Racemark International continue to grow globally, yet are still just an American family business with commitment to quality, safety, and style.