In the technology world, just like the automotive world, the latest development is only as good as the next thing coming down the road. The auto industry is constantly bringing us new technologies, whether it be for safety, entertainment, usefulness or simply for pure innovation.

A lot of new car technologies are specifically built for safety or have some sort of safety focus to them. Some of the latest car technology developments have the potential to revolutionize not just the automotive industry but transportation as a whole.

So what's in store for vehicles of the future? Take a look at the five technologies being tested below. These things might not ever be fully functional on the road, but certainly we can expect elements of the technology to be used sooner rather than later.

However cars change in the future, we at GG Bailey look forward to continuing to make the best custom fit, custom designed automotive floor mats for all makes and models. 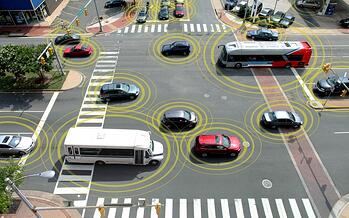 The future of automotive safety isn’t about more airbags or stronger steel. It’s about building smarter automobiles that talk to each other, so your car knows that other car is about to run a red light and applies the brakes to save your bacon. The feds think such technology, called vehicle-to-vehicle communication, is a great idea and want to make sure every new car has it.

V2V technology could be used in conjunction with semi-autonomous technology like adaptive cruise control or pedestrian detection systems — not to mention safety systems like anti-lock braking already required by regulators — to further protect us from ourselves.

Imagine approaching an intersection as another car runs a red light. You don't see them at first, but your car gets a signal from the other car that it's directly in your path and warns you of the potential collision, or even hits the brakes automatically to avoid an accident. This is what the industry is working toward. 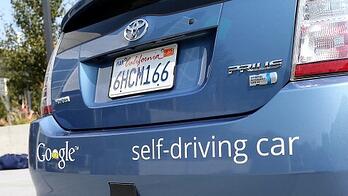 Google engineers have already tested self-driving cars on more than one million miles of public highways and roads. Google's cars not only record images of the road, but their computerized maps view road signs, find alternative routes and see traffic lights before they're even visible to a person. By using lasers, radars and cameras, the cars can analyze and process information about their surroundings faster than a human can.

Self-driving cars are no longer a futuristic idea. Companies like Mercedes, BMW, and Tesla have already released, or are soon to release, self-driving features that give the car some ability to drive itself.

Tech companies are also trying to pioneer the self-driving car. Recently, Google announced that it would be testing its prototype of a driverless car on roads this summer in California. Current predictions are that there will be 10 million self-driving cars on the road by 2020. 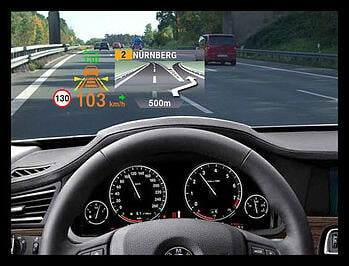 GPS and other in-car displays are great for getting us from point A to point B, and some high-end vehicles even have displays on the windshield, and in the near future cars will be able to identify external objects in front of the driver and display information about them on the windshield.

Think of science fiction stories where a robot looks at a person or an object and automatically brings up information about them and can identify who or what they are. Augmented Reality dashboards will work in a similar way for drivers. BMW has already started implementing a windshield display in some of their vehicles which shows basic information like speed and RPMs, but they're also developing augmented reality dashboards that will be able to identify objects in front of a vehicle and tell the driver how far they are away from the object. The display will overlay information on top of what a driver is seeing in real life.

So, for example, if you are approaching another vehicle too quickly, a red box may appear on the other car and arrows will appear showing you how to maneuver into the next lane before you crash. An augmented reality GPS system could highlight the actual lane you need to be in and show you where you need to turn down the road without you ever having to take your eyes off the road. 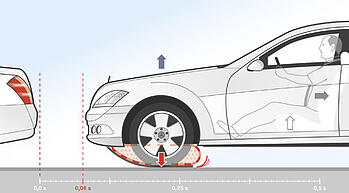 Airbags have saved countless lives, and the technology continues to be developed. We now have curtain airbags, side airbags, knee airbags, seat belts airbags and even ones that deploy under us. And Mercedes is working on a new way to use airbags that moves them away from a passive safety measure and makes it part of an active safety system.

Mercedes is experimenting with an airbag system that deploys from underneath the car that will help stop a vehicle before a crash. The airbags are part of the overall active safety system and deploy when sensors determine that an impact is inevitable. The bags have a friction coating that helps slow the car down and can double the stopping power of the vehicle. The bags will also lift the automobile up to eight centimeters, which counters the car's natural dipping motion during hard braking, improves bumper-to-bumper contact and helps prevent passengers from sliding under seat belts during a collision.

This new technology is still in development and is quite a way down the road from actual road use, but it shows that automakers are always looking for ways to make driving, and ultimately wrecking, safer for the people inside. 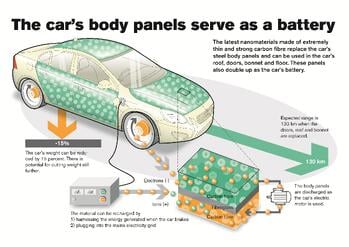 Exxon Mobil has predicted that by 2040, half of all new cars coming off the production line will be hybrids. That is great news for the environment, but one of the issues with hybrids is that the batteries take up a lot of space and are very heavy. Even with advances in lithium-ion batteries, hybrids have a significant amount of weight from their batteries. That's why companies are working to develop energy-storing body panels.

If nanotechnology scientists led by the Queensland University of Technology are on the right track, it may one day be a reality as cars are powered not by batteries, but their body panels --inside of which are sandwiched a new breed of supercapacitors.

They are working on new lightweight supercapacitors, which are a thin, strong, high-energy density film made of two all-carbon electrodes sandwiched around an electrolyte. This film is intended to be set in car body panels, roofs, doors, bonnets and floors. The idea, in the short term, is to combine them with Li-ion batteries, where the supercapacitors can store enough energy to charge the battery in minutes.

Supercapacitors and batteries are already being used in cars, which brings the weight down, but QUT sees a car powered by body panels inside of five years.

Cars will continue to be amazing in the future, but to make your vehicle look amazing right now, check out our custom fit car floor mats. And fore more information about our products and other vehicle trends, check out our blog.