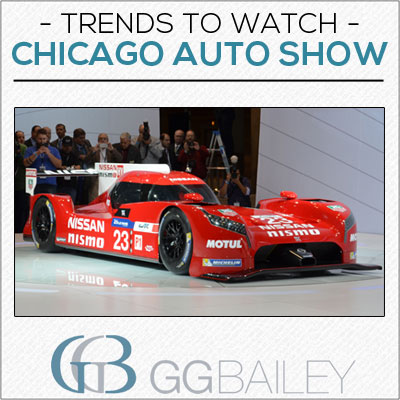 The Chicago Auto Show began this weekend and continues through the end of the week, but if you can't make it to one of the country's largest auto shows, then you can at least read about it.

The event opened to the public on Saturday, but the media had access three days prior, so there is plenty of exciting news to catch up on.

At GG Bailey, we make custom fit, personalized car floor mats for all makes and models of vehicles, so we always make sure to pay attention to the trends and new vehicles that come from the big auto shows. Check out the Design Your Car Mats™ tool to see those options or browse the luxury quality patterns in our Car Couture™ line to get started.

We have been reading about the Chicago Auto Show all weekend, so we picked out some of our favorite headlines to share with you. Check those out below and share your own favorites in the comment section. 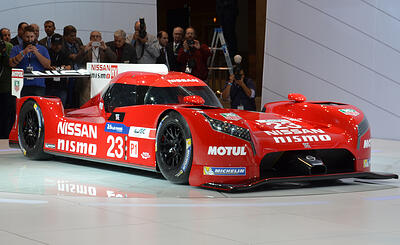 What to look for

Crain's Chicago Business produced an article about the best vehicles to see on display at the auto show this week. They chose to highlight the powerful and technologically advanced vehicles. Five of their suggested were:

Cadillac will show off its CTS-V ultra sedan with an eight-speed transmission producing 640 horsepower in what is essentially a Corvette V-8 power plant.

The Nissan GT-R LM Nismo race car, with 600 horses, will be here on its way to competing at the 24 Hours of Le Mans. A Nismo street concept with a bit less muscle will be available for viewing, too.

The new Dodge SRT Charger Hellcat, which with 707 horses is being touted as the most powerful sedan ever built, may be the ultimate in muscle. (Visitors can get the feel of driving it by hopping into the Hellcat simulator positioned close to the real thing.)

The 2016 Cadillac CTS-V, with a 640 horsepower engine, is the most powerful in Cadillac's history, allowing the car to reach a top speed of 200 mph. But it's a rear-wheel drive, a liability in snowy Chicago winters. Figure on the car stickering at $70,000 and above." 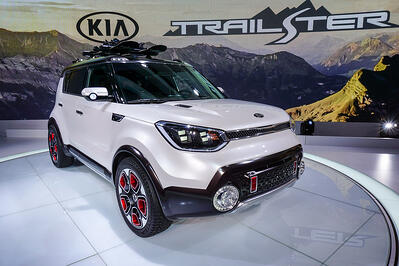 The editors over at AutoBlog picked out their five favorite debuts in Chicago. There choices include a 2016 Ford Police Interceptor Utility, the 2016 Honda Pilot, the Nissan GT-R mentioned above, the Nissan 370Z Nismo Roadster Concept, and surprisingly, the Kia Trail'ster Concept.

Each of the five editors on the panel had 25 total points to award to their personal favorites at the Chicago Auto Show, and the Kia ranked 10 points ahead of the next closest vehicle. You can follow the above link to read why each of the editors went the way they did.

Said Jeremy Korzeniewski of the Kia concept: "I really hope Kia is seriously considering putting the Trail'ster into production. As a competitor to the Jeep Renegade and Fiat 500X, both of which I'm pretty keen on, I think Kia could have a surprise hit on its hands while simultaneously transforming the Soul from a cute urban runabout to a cute urban runabout with street cred."

Every time one of these major auto shows takes place, there seems to be more and more technology on display, and that holds true for the Chicago Auto Show this year. Referred to as adaptive technology, features like lane keeping assist and collison mitigation braking help keep drivers safe by keeping the car in the correct lane and avoiding crashes by applying the brakes for you.

Other technology on display include Apple Car Play and Android Auto. Both are built-in systems that designed to communicate with your smart phone. The Examiner published an interview with Cars.com's Joe Wiesenfelder on the topic.

He told the site: "They’re trying to incorporate the features motorists are already using on their handheld devices, and can be expected to continue using, in a safer, predominantly hands-free way. These systems won’t support every application on the phone. It’s not like games are suddenly going to appear on the dashboard while someone’s driving."