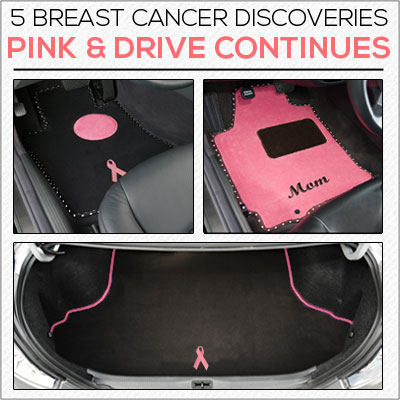 October is Breast Cancer Awareness Month, and at GG Bailey, we take part through our Pink and Drive event.

During the month of October, any GG Bailey order of custom design car floor mats or home mats that feature a Pink Ribbon logo, pink carpet, or any of our other pink elements will benefit the Breast Cancer Research Foundation. All you have to do is pick something pink when you Design Your Mats™  and we will automatically donate 10 percent of the purchase price to aid in the foundation's efforts.

Additionally, we are offering free ground shipping* on all orders through the end of the month. So you can design your own custom fit floor mats, add some pink, benefit breast cancer research, or choose any other design and we will ship your personalized mats for free.

In the US, it's estimated that 1 in 8 women will develop invasive breast cancer during their lifetimes and about 40,000 American women are likely to die from the disease this year alone.

Research has found that the risk of the disease can be lessened by having a healthier lifestyle, such as cutting down on alcohol, eating a healthy diet, increasing physical activity, etc.

Thanks to donations and fundraising efforts, there have been many findings that researchers think may help in combating the deadly disease. Below are five of the amazing discoveries made just this year.

A recent study has revealed that overall weight gain during adulthood, particularly thickening of the waist area, elevates the risk of post-menopausal breast cancer by about 33 percent.

The study was based on 92,834 women aged 50 or older who were enrolled in the UK Collaborative Trial of Ovarian Cancer Screening between 2005 and July 2010 and who had gone through menopause. Researchers found that going up one skirt size every 10 years was associated with a 33 percent greater risk of breast cancer, while going up two skirt sizes in the same period was linked to a 77 percent greater risk.

An expanding waistline has also been linked to other cancers, including those of the pancreas, lining of the womb, and ovaries, because, as researchers pointed out, midriff fat is more harmful.

Scientists have developed a new high tech "electronic skin" that can detect small breast lumps better than self breast examinations. The new technology, researchers, said could also be used to screen patients for early signs of melanoma and other cancers.

Knowing the size and shape of a lump could allow for earlier identification of breast cancer, which could save lives. Detecting lumps and determining their shape when they're less than half that size improves a patient's survival rate by more than 94 percent. Some devices already mimic a manual exam, but their image quality is poor, and they cannot determine a lump's shape, which helps doctors figure out whether a tumor is cancerous.

Researchers wanted to fill that gap. They made a kind of electronic skin out of nanoparticles and polymers that can detect, "feel" and image small objects.

A simple blood test is currently being developed that could help predict the likelihood of a woman developing breast cancer by testing for a certain epigenetic signature, even in the absence of a high-risk BRCA1 gene mutation.

“We identified an epigenetic signature in women with a mutated BRCA1 gene that was linked to increased cancer risk and lower survival rates,” said lead researcher Professor Martin Widschwendter, from University College London. “Surprisingly, we found the same signature in large cohorts of women without the BRCA1 mutation and it was able to predict breast cancer risk several years before diagnosis,” he added.

This is interesting and promising research, they warn, but a reliable blood test for non-inherited breast cancer does not seem to be in the cards any time soon. The test showed potential, but it currently isn't very accurate.

A new study found that women who had recently used contraceptive pills with high-dose estrogen had a 50 percent higher risk for breast cancer than women who had never taken or stopped taking birth control pills. The study, which was published in the journal Cancer Research, also found that low-estrogen pills did not increase the risk.

Instead of asking women to report how much birth control they had taken, which is the norm in these sorts of studies, lead researcher Elisabeth F. Beaber culled information about pill brands, doses and length of time taken from pharmacies. She analysed data from 1,102 women with breast cancer and compared them to 21,952 control women and found that pills with high oestrogen increased breast cancer risk 2.7-fold, while pills with ethynodiol dictate increased risk 2.6-fold. Low-oestrogen pills did not increase cancer risk.

An experimental breast cancer vaccine called GP2 is showing a lot of promise in human trials and could one day be an important option to prevent recurrence in breast cancer survivors.

“The ultimate goal is to develop a preventive tool that will minimise the risk of recurrence in women who have already had breast cancer and for whom standard therapies have failed,” wrote principal investigator Elizabeth Mittendorf, M.D., Ph.D. of the University of Texas.