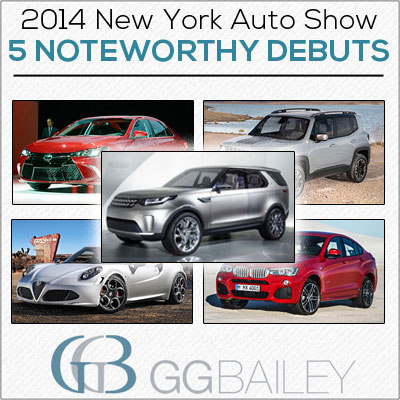 The 2014 New York Auto Show continues through this weekend in the nation's most populous city, but plenty of great vehicles have already made their United States debuts. Though hundreds of new vehicles are on display, we have picked five that seem to be getting the most buzz so far.

At GG Bailey, we make custom fit, custom designed car floor mats for all makes and models, so we like to follow the news that comes out of the national auto shows so we can stay on top of our customers' needs. Cars making their debuts this week are cars we will be making personalized floor mats for in the near future, and we can't wait to get to work.

If you are new to GG Bailey, you can learn more about our Design Your Car Mats™ options and Car Couture™ line using those links, and you should also know we have free ground shipping* available for Mother's Day. Whether you design custom car floor mats for yourself or personalize a gift for your mom, you won't have to pay for shipping.

We process all orders in two business days or fewer, and you can see our FedEx shipping schedule here to determine how soon you need to order to receive your car floor mats on time. We also have expedited shipping options available for an extra cost.

So check out our five noteworthy vehicle debuts from the New York Auto Show below and remember, we can make custom designed car floor mats for this vehicles and whatever you drive. Comment below to let us know what you think of our list or to add your own vehicles to the conversation. 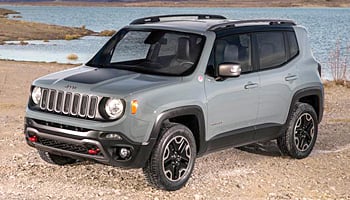 Jeep is probably the most American of brands, so Jeep is taking a bold step by bringing in what it calls an American-designed and Italian-built small crossover. Jeep used the New York Auto Show to debut its smallest-ever vehicle, the 2015 Renegade, for the first time on U.S. soil. The vehicle made its global debut in March at the Geneva Auto Show, and it highlights Jeep's aim to lure in more young buyers by entering the small crossover market.

The new Jeep shares it platform with the Fiat 500L. It makes room for 8.1 inches of wheel articulation and 8.7 inches of ground clearance. The goal is to translate the traditional appeal of Jeep's bigger models into a smaller package.

The Renegade powertrain lineup is set to include a 184-horsepower in-line 4-cylinder coupled with Fiat's new nine-speed automatic transmission and a 160-horsepower I-4 paired with a six-speed manual transmission. Both engines can be ordered with front- or all-wheel drive, with Trailhawk models adding a low 20:1 crawl ratio, low-speed pedal mapping and low-gear shift strategy for more serious rock-hopping. Jeep expects the 2015 Jeep Renegade to achieve more than 30 miles per gallon on the highway with either engine, but detailed numbers haven't been released.

The styling is modern while maintaining Jeep details throughout, such as the rounded headlights and vertical-slotted grill. There are two removable roof panels to let the sunshine in, or a power sunroof can be ordered in its place. The interior is roomy enough and features lots of sophisticated touches. The vehicle is scheduled for release late this year. 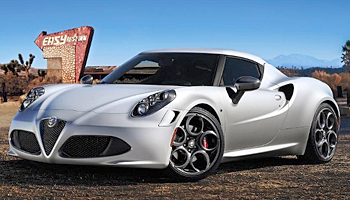 Alfa Romeo is officially coming back to the U.S. marketplace. Yes, the Italian brand, revered by car-lovers the world over, will make its grand return stateside this summer, and its doing so with a car that impressed the crowds at the New York Auto Show. The new 4C, Alfa’s stunning coupe, will be the marque’s first model offered for sale in America since the 164 sedan in 1995.

The nimble coupe will be available to the first 500 customers in a Launch Edition guise, which will include one of three colors: Alfa Red, Rosso Competizione or Madreperla White. Outside, new, clear bi-xenon headlights replace the plastic covers of European models, while a carbon-fiber spoiler and mirror caps complement all-new forged wheels. The suspension is firmer, with performance-tuned shocks and stiffer front and rear sway bars. Meanwhile, a racing exhaust should help the turbocharged, four-cylinder engine make its presence known. It doesn't seem like the power output is changing thanks to the new exhaust, although we're expecting the 4C's already throaty warble will sound even better. 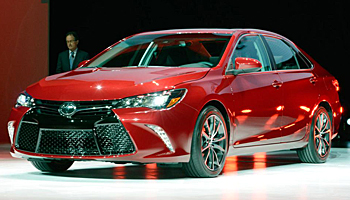 Toyota has sold more than 10 million Camrys since the model first went on sale in the U.S., and approximately one family out of every 50 currently owns one, but with rivals taking chunks of the mid-sized sedan market recently, it was time for a style upgrade. For the 2015 model year, every body panel, except for the roof, has been altered on the Camry. A sportier model, dubbed the XSE, has also been added to the range, and this was the version that rolled onstage during Toyota’s press conference.

The changes in America's most popular car go more than skin-deep. It would have been easy for Toyota to ride on its success and let the design of the Camry sell a few more million cars for another couple of years. But Toyota stepped up with an all-new body, especially distinctive from the front.

The XSE shares its mesh grille and front fascia with the existing SE trim, but includes special 18-inch wheels, retuned suspension, and a sportier setting for its electric power steering. It certainly looks edgier, and a touch more elegant, than the outgoing Camry. The cabin has been similarly upgraded, with higher quality materials and a more modern layout. The XSE also included suede-like inserts throughout the cabin.

The new Camry required redesign of 2,000 parts. While the engine options and chassis remain essentially the same, the body panels have been almost completely changed. The result is a car that is far less dowdy and far more able to compete in a class where style has become a key differentiating factor.

Toyota has not yet released information regarding pricing and release dates. 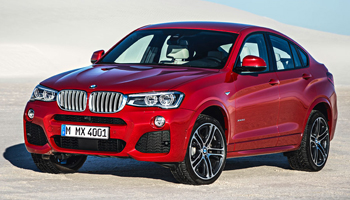 BMW's niche creation program continues with the BMW X4 it unveiled at the New York Auto Show. The car was officially unveiled following the Geneva Motor Show last month but made its world debut only recently.

The car has been described as a cheaper version of the BMW X6. While the X6 adds some coupe style to the BMW X5, the X4 does the same thing for the BMW X3. BMW describes the sleek four-door as a Sports Activity Coupe. The design of the front end looks nearly identical to the BMW X3, whereas the rear end  is styled after the X6 with a sloping roofline and a bonnet lip on the rear hatchback.

Those lucky enough to crawl in in the BMW X4 sit lower by 0.8 inch up front and 1.1 inches at the rear. The BMW X4 is 1.5 inches lower and 0.6 inches longer. Two versions are available with a standard model and an M-Sport upgrade featuring the usual more aggressive front and rear facias. 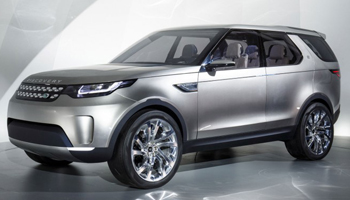 This one is a concept, but Land Rover stole the 2014 New York Auto Show with its Discovery Vision Concept. With an impressive launch onboard the USS Intrepid, the automaker offered a strong hint at the design direction of the Land Rover brand and the return of the Discovery nameplate to the United States.

The Land Rover Discovery first entered the U.S. market in 1994, and when it was redesigned in 2004, the Discover nameplate was dropped in North America, becoming the LR3 and later the LR4 for the 2009 update. Te intent is to revive the LR2 and LR4 by creating a  family badge and a unique design direction for the group of vehicles. Hence the reintroduction of the Discovery brand. Not unlike how Range Rover has become three luxury-focused models, here Land Rover will focus on leisure.

The seven-seat Discovery Vision Concept aims to show off the potential future Discovery vehicles, which will borrow heavily from its design style. Better yet, it’s a working concept that showcases some impressive technologies. Land Rover, whose pioneering Terrain Response off-road system has been liberally copied by Jeep (Selec-Terrain) and Ford (Terrain Management) for their SUVs, debuted several new ideas designed to make driving and off-roading much easier. Smart Glass can be used to display information on the windscreen, sunroof and side windows, but is otherwise transparent. Transparent Bonnet uses cameras and Smart Glass to let drivers “see” through the hood of the car, overlaying an image of the terrain in front onto the windscreen -- which should help visibility when negotiating obstacles or parking. Laser Terrain Scanning does exactly what it sounds like it does, scanning the road letting the car better anticipate the terrain ahead and notifying the driver of upcoming obstacles.

To top it all off, the Discovery Vision Concept is itself a great looking vehicle. No announcements were made concerning production of the Discovery, but the smaller Discovery Sport model is expected to launch in 2015, replacing the LR2 in North America.